The notary at civil law is a highly trained public official who drafts private agreements into documentary language and then functions as an archivist of the document he or she creates. The properly signed contract executed before a notary public at civil law is an "authentic act," deemed to be proof of its contents. 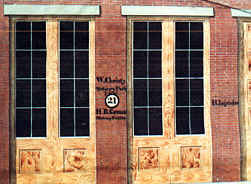 From time immemorial, citizens in civil law jurisdictions such as France, Spain, Italy, the New World nations of the Caribbean and Latin America, Canada, and Louisiana have visited the notary of their local village, town, or city to execute agreements. Here they entered into contracts to purchase land, borrow money and pledge collateral, make wills and marriage covenants, form partnerships, conduct family meetings, execute building contracts, purchase shop inventory, adopt children, and so on. In New Orleans before the Civil War, they also bought, sold, and emancipated slaves before the notary public. The civil law notarial system is designed to provide a clear and reliable framework for citizens to conduct their legal business at least cost. The civil law notary functions as an impartial third party who drafts private contracts into clear and precise language that is fair to both sides. The system is designed to preclude an adversarial process wherein parties bring in their separate lawyers poised to formulate a favorable deal for their clients. In addition to his role as drafter and mediator, the notary identifies and guarantees the identities of parties to acts, witnesses the agreement, reads the act aloud to the parties, and affixes his official, distinctive signature to it. The notary also provides for residents of the locality to sign the act as competent witnesses.

These safeguards exist to prevent vague or onerous agreements by parties not well known to each other from leading to litigation later. In this way, civil law "bends over backwards" to provide stability in society and protect the sanctity of contracts. The Louisiana Civil Code states that private agreements, properly entered into, are enforceable between the parties as if they were enacted law.

What is a Civil Law Notarial Act? A civil law notarial act is a structured private sector contract that is drafted and signed by the notary and preserved in the public sector. The properly executed notarial act bears upon its face the evidence that all the formalities required by law for validity have been complied with. It contains a statement of the notary's authority, the date, the place of execution, and the identities of parties to the agreement. It states the object of the agreement, its terms, an acceptance, and the consideration. The notary's original signature at the end of the act provides prima facie evidence at civil law that the agreement he witnessed actually took place and is therefore enforceable between the parties, by society if need be.

One of the subtleties of the civil law notarial act is the manifest context of its safekeeping, a context that further guarantees its authenticity. The act remains in numbered and dated order in a bound notarial volume with an index calling for it by party name and act type, and stating its location in the book. The act remains in perpetuity among other acts systematically open to the public for viewing. Throughout all of their changes in domicile, notarial acts have been maintained in this fashion in New Orleans.

The notary at civil law acts as an archivist of the document he creates.

Before 1970 Louisiana law required that the notary preserve his records until he died or retired. He had to have his notarial acts bound at least every second year. He had to maintain an office open to the public during regular hours in a brick building with a tile roof. Over time, the notary's archives grew large. Citizens repaired to his office to view title information and to order true copies of the original contracts in the notary's archives. When a notary died or retired, he passed his records down to a chosen and trained successor in office. This system prevailed in New Orleans from the time of the city's founding in 1718 until 1867.

In 1867, the Louisiana Legislature, in a bold experiment not known elsewhere, created the central repository known as the Office of the Custodian of Notarial Records for the Parish of Orleans. No longer were notaries authorized to bequeath their archives to a successor. Rather the law now required that they or their heirs release the collection to the central repository upon the notary's retirement or death. The Notarial Archives was born and began to grow rapidly. Over time the Legislature continued to regulate and fine-tune its policy in providing for the Notarial Archives. 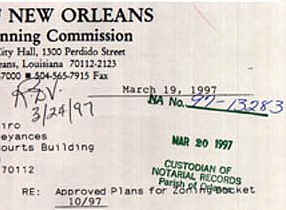 After a century of fine-tuning, the Legislature made another great change in regulating notarial practice in Orleans Parish. It decreed that after July 29, 1970, no longer would notaries be able to keep their records until death or retirement. After that date each act, as it was individually created, must be presented to the Custodian of Notarial Records if it was to be recognized in the property recordation system. The Custodian was to assign a number to the acts as they were filed and have them bound by the Archives office. Over one million notarial acts have been filed under the "new" system, which went into effect August 1, 1970. Today acts are retrieved by their "NA NUMBER" rather than by the notary's name and the date of the act as previously.

Most of the local notary's business dealt with sales or mortgages of immovables in the city and surrounding parishes. Notaries also received wills, marriage contracts, building contracts, powers of attorney and individual declarations. They conducted estate inventories, family meetings and meetings of creditors. They recorded acts of partnership, corporate charters, maritime bonds and marine or ship captains' protests. Slave sales and emancipations from prior to the Civil War are another important act type. These records provide names, ages, and skills, indicate color or ethnicity, and may provide lineage useful for the study of African-American history.

In addition to text-based documents, the Archives holds thousands of "Plan Book Drawings" created during the 19th century by civil engineers, surveyors and architects. This collection includes topographical elevations, construction documents and site plans of property located throughout New Orleans, the state of Louisiana and in surrounding states. The signed and dated drawings depict both property lines and buildings, and were usually created to advertise judicially-ordered auction sales held to comply with the rules of civil procedure.